Gullwing doors are  hinged at the roof and opened in a vertical sweep. They are named so on account of the shape given to the car when both doors are opened, similar to that of a seagull’s wings in mid-flight. Not only reserved for the Max Power generations of old, here are 11 production cars with gullwing doors.

For the 300SL the gullwing door was more of a technical feature rather than a styling feature – the race-derived, space-frame chassis made for a high sill, too high to install conventional front-hinged doors.

The 300SL stole the record for fastest production car from the Jaguar XK120 with a top speed of 152 mph – a car which itself could trace its roots firmly directly from racing. The 300SL was derived from the race car by the same name, which is noteworthy because it is usually the other way around, with race cars being built out of existing road-going models. The 300SL’s aforementioned racing counterpart is often associated with pioneering the gullwing door two years previous to the road-going model.

When making the 300SL race car, Mercedes took the engine out of its big 300 series sedan and put it into a small and lightweight car, always a good tactic for going fast. But, when it came time to put the engine into the road car, the engineers really put some serious effort into making it better. The design of the roadgoing body had such a low hood that the inline-6 engine had to be canted 50 degrees in order to fit under it. The carburetors that had been used in the race car were replaced with a hugely sophisticated Bosch mechanical direct injection system. This bumped the power up from the unimpressive 175 hp of the race car to 215 hp, a full 100 hp more than the first 300 got out of the same engine just three years earlier. 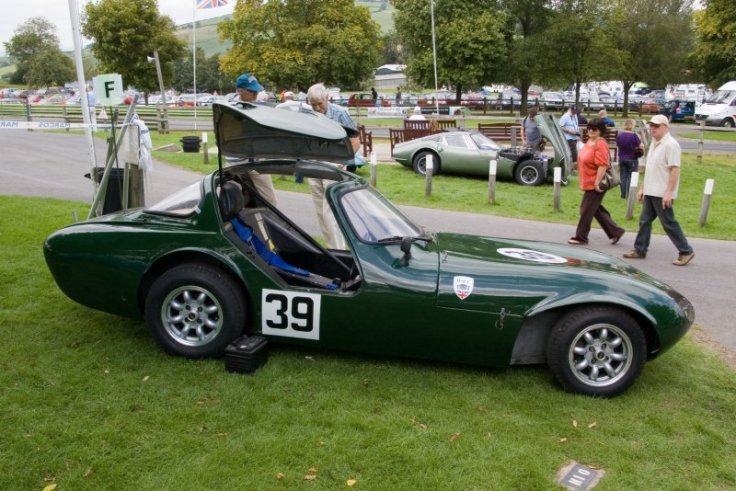 The first car by Marcos, the Xylon, which had some noteworthy stylistic features such as gullwing doors and a windscreen arranged in four panels, was nicknamed the “Ugly Duckling”. A total of nine early production models, aimed at motorsport, were built in 1959 and 1960. For production the body was made less radical but initially retained the gullwing doors. The Xylon was powered by a choice of Ford engines varying from 997cc to 1498cc and made use of Standard 10 and Triumph Herald steering and suspension components. 39 were made up to 1963. Designed by Frank Costin, famous for his work in the Vanwall motor racing team and on numerous Lotus sports racing cars, the Xylon was (and still is) better known as the ‘Ugly Duckling’, due to its uncompromising appearance.

Built purely as a race car to compete in 750 Motor Club events, the car was also unusual due to its wooden chassis, but this gave it a very light weight and in the hands of Jackie Stewart, Jem Marsh and many others, it achieved outstanding success. The car was originally powered by a Ford 105E 997cc engine and it’s high roof was dictated by Jem’s considerable height (something which makes all Marcos cars a good choice for taller drivers, to this day). The original car was built in Dolgellau, Wales by Frank Costin, but it was later built in a small production run in Luton with the Adams brothers. Jem Marsh raced the ex-Stewart car for many years in FIA and HSCC races and was always a contender for, at least, class victories.

In 1961 brothers Dennis Adams and Peter Adams started working with Marcos and introduced several changes to the original design. The Marcos Luton Gullwing and the Spyder were introduced in November 1961. The Adams brothers and Jem Marsh realised that to make a good living out of building Marcos cars would require something with a wider appeal than the Xylon, successful though it was as a race car. The first step was to redesign the bodywork of the Xylon to be a little sleeker and this car was known as the Luton Gullwing (because, by now the cars were being built in Luton). This car still sold mainly to racers, although a few were sold as road cars. Once again it featured gullwing doors, but was a much more attractive car than the original “Ugly Duckling”.