Stories of the mythical black Escort RS Turbo Series 1 owned by Lady Diana have been floating around the internet for years now. There’s a smattering of conflicting information out there so I think it’s time to put this to bed.

Steve Saxty, whose name I recognise from his book “The Cars You Always Promised Yourself” as well as a few 1980’s and old school car groups I have seen him post in, reliably recounts the following in post earlier this year on Treasured Cars.

The Royalty Protection Command (SO14) was concerned that when Diana swapped her silver Escort Ghia for a red 1.6i Cabriolet it was too high-profile. He mentions that she was encouraged to swap it for a stealthier car. Diana wanted the new Escort RS Turbo – however, white was easily seen. The late Harry Calton at Ford PR dealt with SO14 and he suggested making a black RS Turbo. In turn, SO14 suggested two extra cars, one as a decoy and a third for another royal. Black paint was already in the plant, as well as a second interior mirror for the bodyguard and a regular five-slat grille that added to the “disguise”. 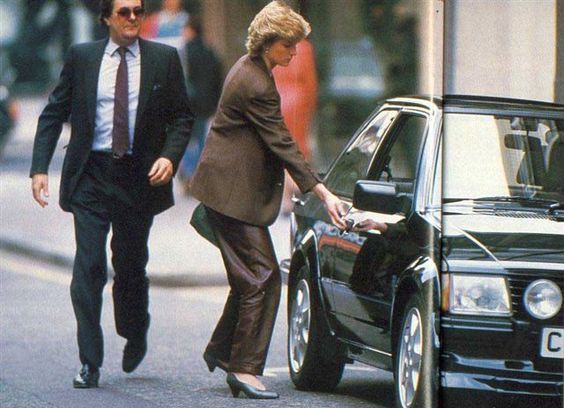 The car currently resides in the “Bonkers” collection of Mark Bailey along with a number of other low mileage and low volume RS models. Hanging above it, a similar image of a young Diana, entering the driver’s seat of the very same Escort, deep in conversation with a bodyguard.

Now if you frequent the ever reliable world of forums you may have seen other vehicles which stake claims to be factory black RS Turbos. Now, we know that C462 FHK is in fact the car owned in driven by Diana, but what of the other two?

This car, C515 DYT, often pops up in forums mistakenly described as Diana’s – however the true story behind this car isn’t terribly clear. Is it one of the two decoy cars ordered by SO14? Or is it just another recreation?

There have been other factory white cars resprayed in other colours including the red Datapost demo cars, a claimed blue/navy car, and another claimed grey car which was reportedly immediately taken back and resprayed – assumingly in white.

This grey restoration was also up for sale in late 2018, C368 LOJ, appeared in Classis Ford magazine in May 2019 where it sat a period correct mod of white 17 inch softlines. Restored by Rod & Mick at RM Classic cars, their “Grey Edition” RS Turbo was built to create a buzz.

If you’re enjoying our web posts, consider subscribing to our mailing list below and supporting the growth of the Infernal Combustion Community by shopping at our new web store found under the ‘Store’ tab in the header of of the website.