Audi have had their fair share of triumphs on the road as we have shared in the first 4 parts of this week’s history – But it wouldn’t be fair however to come this far without mentioning some of their glistening motorsport successes.

The Type C represented the most powerful development stage of the Auto Union 16-cylinder racing car, which developed up to 560 PS. The Streamliner celebrated its debut at the 1937 Avus Race, where the new banked curve was driven on for the first time. In the same year Bernd Rosemeyer drove this car on the Frankfurt to Darmstadt autobahn, accelerating it to a speed of over 400 km/h (249 mph) for the first time on a normal road, and set several world speed records.

Bernd Rosemeyer on the Streamliner speed records – “You can’t feel the speed itself at all. The car is wonderfully quiet and obeys the steering wheel’s every command. You mustn’t grip the steering wheel hard, just hold it very gently between the fingertips to prevent transferring the sway of the body to the steering. The steering wheel should be moved no more than perhaps 1 to 2 mm. The cross joints of the concrete road surfacing can be felt as impacts at about 380 km/h (236 mph). When you pass under the bridges you feel a terrible impact against the chest , caused by the car’s air displacement, which can’t level itself out fast enough. Maximum acceleration is needed to keep the car in the middle of the road.”

For the 1938 season, in which the size of the engine was limited to 3 litres as part of new international Grand Prix regulations, Auto Union engineers led by Robert Eberan-Eberhorst developed the 12-cylinder Auto Union Type D racing car.

The fundamental technical concept of the car – mid-engine installation, torsion bar suspension, compressor engine – is based on the 16-cylinder Type C predessor developed by Ferdinand Porsche. This Silver Arrow (a 1939) is one of three cars which survived the exodus to the former Soviet Union as part of reparations after the end of the war in 1945. It was discovered in the former Soviet Union by the American collector couple Karassik and restored in England between 1992 and 1994.

In 1938 Auto Union built a hill-climb racing car that was a special combination of the old Type C and the new Type D. The chassis was from the Type D, the large 16-cylinder engine from the Type C. Due to a change in Grand Prix regulations, this engine was only used in hill-climb races from 1938, while the new Type D with a 12-cylinder supercharged engine was used in Grand Prix races. Almost all Auto Union racing cars were shipped to Russia after the war as reparations. The model pictured (a 1939) returned to Germany in 1995 and is the only remaining example of the Auto Union Silver Arrows that has been completely preserved in its original form. 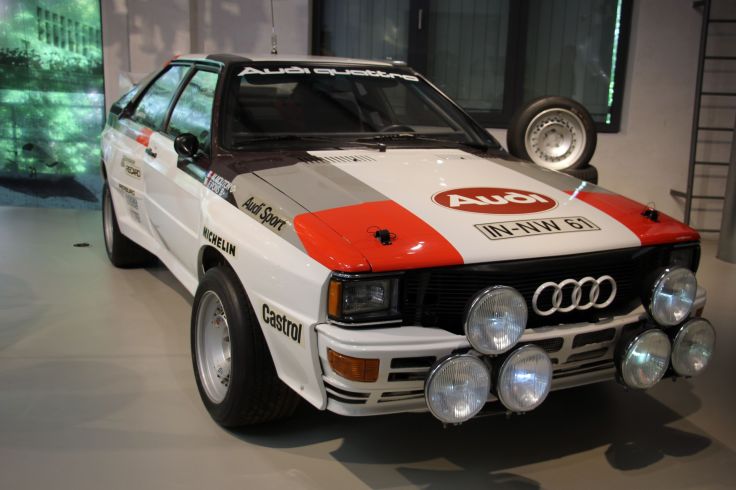 After Walter Röhrl has turned down the Audi rally team’s offer at short notice in favour of a contract with Mercedes, race manager Walter Treser hired the French female driver Michèle Mouton. Mouton had no trouble asserting herself among her colleagues and competitors, but sports press commented on her success with blatant chauvinism.

After winning the Constructors’ World Championship for the first time in 1982, over the next five years the Quattro went on to win 23 races, making it one of the most successful rally cars since the start of the World Championship. Hannu Mikkola and Arne Hertz won a commanding victory in the 1985 Hong Kong Peking Rally. The Quattro team of Blomqvist and Berglund repeated this success the following year. Hannu Mikkola won the 1987 Safari Rally in Kenya in an Audi 200 Quattro.

Pikes Peak – the 4,301-metre summit in the North American federal state of Colorado, has hosted the most famous American hillclimb since 1916. At this venue, Audi wrote another chapter in its motorsport history. The spectators witnessed the first outing of an Audi works team at the Pikes Peak Hillclimb in 1984 when Michèle Mouton won the rally class in the short-wheelbase Audi Sport Quattro. In their following attempts in 1985, 1986 and 1987, Audi took outright victories three times in succession. The Audi Sport Quattro S1, driven by Walter Röhrl, was the first driver and machine to break the 11 minute barrier.

The race to the summit of Pikes Peak had traditionally been the preserve of American drivers in American cars until 1985. The 1987 Pikes Peak attempt in the Quattro S1 was a fitting final demonstration of the car’s class, with Röhrl beating the existing record by an incredible 21 seconds.

The major breakthrough on the American race scene took place in the 1988 TransAm series. Audi entered an Audi 200 Quattro with around 530 PS on tap, and a distinguished team of drivers: Hurley Haywood, Hans Joachim-Stuck and Walter Röhrl. Haywood won the driver’s trophy with ease, and Audi took the constructors’ title. In 1989, Audi switched the the IMSA GTO series in an Audi 90 with a five-cylinder turbocharged engine putting out around 620 PS.

Audi entered the American IMSA series’ GTO class for the first time in 1989. The IMSA (International Motor Sports Association) racing series is one of the three most important motor sport championships in the USA and Canada. The races covered an average distance of 200 to 500 kilometres, a major endurance test for any car. The teams of Hans-Joachim Stuck / Walter Röhrl, and Hurley Haywood / Scott Goodyear lined up for Audi. Hans-Joachim Stuck came away the outstanding driver , winning a total of seven races. While Audi secured the runner-up title straight away, it missed winning the championship outright for the sole reason of not having run the long-distance races in Daytona and Sebring at the start of the season. Pictured is said car.