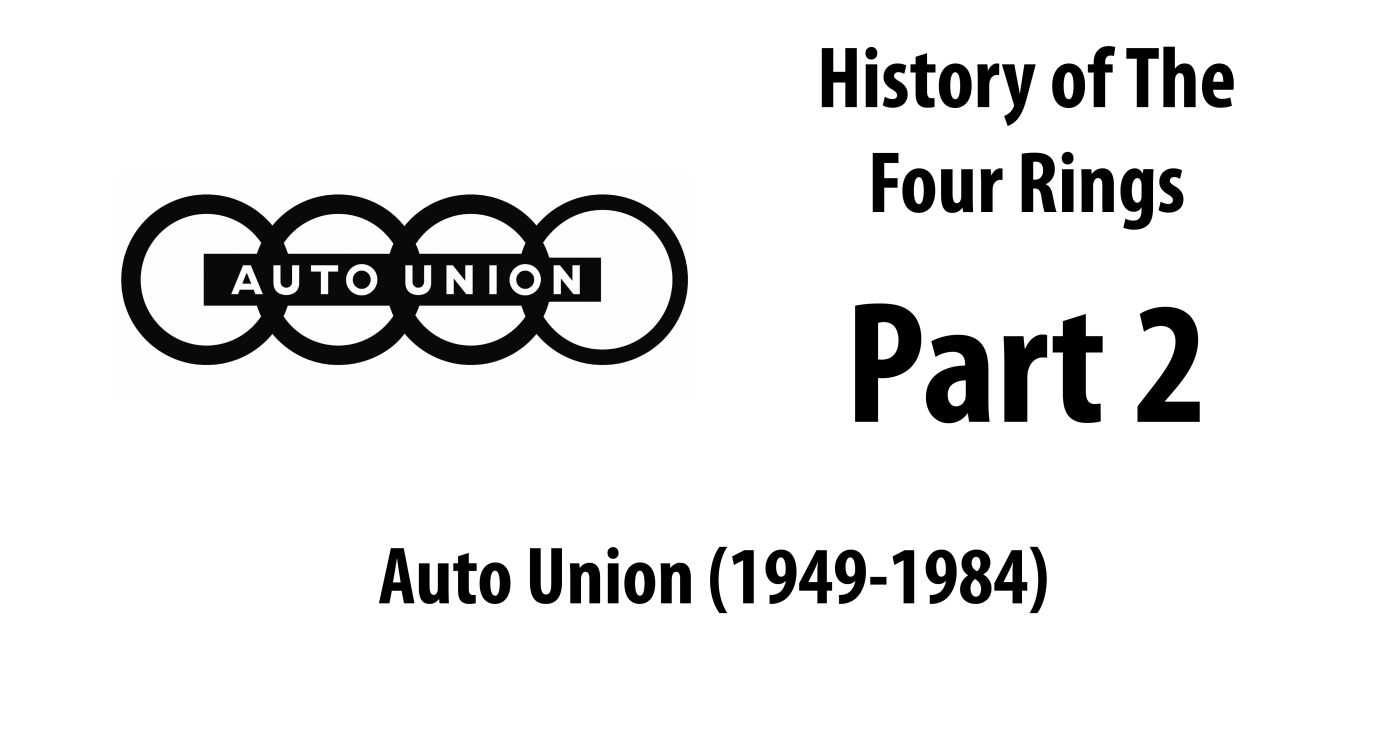 In 1964, Volkswagen acquired a 50% holding in the business, which included the new factory in Ingolstadt, the DKW and Audi brands along with the rights to the new engine design which had been funded by Daimler-Benz, who in return retained the dormant Horch trademark and the Düsseldorf factory which became a Mercedes-Benz van assembly plant. Eighteen months later, Volkswagen bought complete control of Ingolstadt, and by 1966 were using the spare capacity of the Ingolstadt plant to assemble an additional 60,000 Volkswagen Beetles per year.

Why in 1965 was the brand name Audi selected from the four companies that made up Auto Union? Well for a start Auto Union did not own the rights to the names Horch and Wanderer. Moreover, the name DKW, with its two stroke engine history, no longer seemed attractive enough. It was therefore decided in 1965 that the name Audi would be used. The name “Audi” was already being talked about in the press as the new model model before a final decision had been taken by the board of management. A former Auto Union employee, who wanted to make sure that the Auto Union tradition lived on, was suspected of being deliberately indiscreet.

Unit the day on which Ludwig Kraus presented his secretly developed Audi 100 to Volkswagen boss Nordhoff in 1966, there was no guarantee of technical modernisation or that the Audi brand had a future. Kraud could not count on his design being accepted when Prof. Nordhoff appeared in Ingolstadt. Auto Union managing director Rudolf Leiding remembers hearing Nordhoff’s “yes” to the Audi 100: “Then we removed the tarpaulin from the model… Nordhoff walked around it a few times and had a really red neck to start with. And because I know him so well, I knew that this was a bad sign… so when Nordhoff said: ‘Mr. Leiding this car has the go-ahead’, I breathed a sigh of relief.”

The first Audi 100, developed by Volkswagen’s very much subsidiary Auto Union at Ingolstadt, was shown to the press as a four-door sedan on 26 November 1968. Its name originally denoting a power output of 100 PS (74 kW), the Audi 100 was the company’s largest car since the revival of the Audi brand by Volkswagen in 1965.

Now it’s important to go back a step here and first give a short background into NSU. NSU originated as the “Mechanische Werkstätte zur Herstellung von Strickmaschinen”, a knitting machine manufacturer established in 1873 by Christian Schmidt, a technically astute entrepreneur, in the town of Riedlingen on the Danube. The business relocated in 1880 to Neckarsulm. There followed a period of rapid growth and in 1886, the company began to produce bicycles, the first of them a ‘high wheeler’ or ‘Penny-farthing’ branded as the “Germania”. By 1892, bicycle manufacturing had completely replaced knitting machine production. At about this time, the name NSU appeared as a brand name. The first NSU motorcycle appeared in 1901, followed by the first NSU car in 1905.

In 1932, under pressure from their bank (Dresdner Bank), NSU recognised the failure of their attempt to break into volume automobile production, and their recently built car factory in Heilbronn was sold to Fiat, who used the plant to assemble Fiat models for the German market. From 1957, NSU-Fiat cars assumed the brand name Neckar.

During World War II NSU produced the Kettenkrad, the NSU HK101, a half-tracked motorcycle with the engine of the Opel Olympia. They also made the 251 OSL motorcycle during the war.

The technical “avant-garde” in every respect: the NSU Ro80, first seen at the 1967 German Motor Show in Frankfurt, was a totally new and epoch-making design. Its styling was modern and elegant in a manner never previously attempted. Elaborate running gear and – a first for NSU – front-wheel drive gave the Ro80 its excellent road behaviour. Its most remarkable feature was of course its twin-rotor rotary engine, which was notable for its exceptional smoothness. Awarded the “Car of the Year” title in 1968, the Ro80 remained in production until 1977 and was also the last passenger car to be produced by the long-established NSU company and bear its name.

Almost all fundamental car-related inventions were presented back in the 19th century. These include the combustion engine. This principle was improved continuously in the years that followed. The only new development in the field of combustion engines appeared in the 1960s when Felix Wankel developed his rotary engine, which was installed in the Ro80. We have completed an in depth history of the rotary engine which can be found here.

In 1969, Auto Union merged with NSU, based in Neckarsulm near Stuttgart, to form Audi NSU Auto Union AG. In 1967, the new NSU Ro 80 was a car well ahead of its time in technical details such as aerodynamics, light weight, and safety. However, teething problems with the rotary engines put an end to the independence of NSU.

The new merged company was incorporated on 1 January 1969 and was known as Audi NSU Auto Union AG, with its headquarters at NSU’s Neckarsulm plant, and saw the emergence of Audi as a separate brand for the first time since the pre-war era. Volkswagen introduced the Audi brand to the United States for the 1970 model year. That same year, the mid-sized car that NSU had been working on, the K70, originally intended to slot between the rear-engined Prinz models and the futuristic NSU Ro 80, was instead launched as a Volkswagen.

In September 1973 (for the 1974 model year) the 100 received a minor face-lift with a somewhat smaller squared-off grille, with correspondingly more angular front fenders, and with reshuffled taillight lens patterns. The rear torsion bar was replaced by coil springs. For model year 1975 the base 100 was re-christened the 100 L and received a 1.6 litre four-cylinder engine (coming out of the Audi 80). A four-wheel drive prototype of the Audi 100 C1 was built in 1976, long before the appearance of the quattro.

After the launch of the Audi 100 of 1968, the Audi 80/Fox (which formed the basis for the 1973 Volkswagen Passat) followed in 1972 and the Audi 50 (later rebadged as the Volkswagen Polo) in 1974. The Audi 50 was a seminal design because it was the first incarnation of the Golf / Polo concept, one that led to a hugely successful world car. Ultimately, the Audi 80 and 100 (progenitors of the A4 and A6, respectively) became the company’s biggest sellers, whilst little investment was made in the fading NSU range; the Prinz models were dropped in 1973 whilst the fatally flawed NSU Ro80 went out of production in 1977, spelling the effective end of the NSU brand. Production of the Audi 100 had been steadily moved from Ingolstadt to Neckarsulm as the 1970s had progressed, and by the appearance of the second generation C2 version in 1976, all production was now at the former NSU plant. Neckarsulm from that point onward would produce Audi’s higher end models.

The third-generation Audi 100 presented in 1982 represents a milestone in European car manufacturing and was packed with the latest technology of its time. Its drag coefficient of just 0.30 set a new world record for production saloon cars. The Audi 100 introduced completely new design, construction and production technologies, and set standards not only in terms of aerodynamics, but also in the fields of active and passive safety and body quality.